The sudden death of a 15-year-old girl has sparked anger among peasant farmers at Tsremati Yoyim a farming community near Nkurakan in the Yilo Krobo Municipality of the Eastern Region.

The girl Mavis Tetteh died while being carried at the back of some men in the community who were rushing her to the hospital through the deplorable mountainous route.

The deceased girl was suffering from severe abdominal pains. She has since been buried

Tei Evans, a resident told Starr News that, the girl died due lack of good roads to the community to facilitate emergency transportation to Hospital.

He said politicians continue to deceive the community on the construction of roads to link farming communities in the area to Nkurakan.

“This year, it will be war, no politician would be allowed to campaign in the community if they fail to construct the road to the area. Are we not Ghanaians? Why do you treat us like this? We have very fertile land here but we are unable to farm in commercial-scale because the produce will rot and your toil will be in vain. In this community, we don’t have road, no clinic, no school building no water, no electricity, why? ” Tei fumed.

Tsremati Yoyim and other neighbouring Farming communities such as Kokofu, Wrekonya, Dorguanor all located Yilo Krobo Municipality are known to be the food basket of the municipality, but there is no road network linking the communities to the market centres, hence farm produces such as vegetables, cassava, plantain mostly rot in the bush. 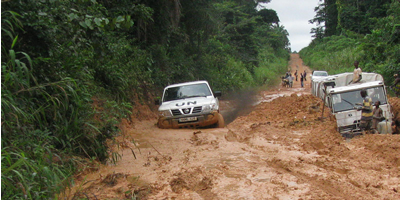 Farmers, particularly Women and Children, carry on their heads, the farm produces through bushes to descend a high rocky mountain to market centres to sell for income. The worrying aspect is School Children found carrying heavy loads to market every market day. They get to school always very late, exhausted and drenched in sweat.

The lack of road to the communities has discouraged the youth who have ditched farming and migrated to urban areas in search of alternate jobs. Others who chose to stay have veered into bead making to make ends meet.