Elderly Man Steals Laptop And Hides It In His Pants - (Video).

• It is a public holiday to celebrate Eid-ul-Adha

Government has declared Tuesday, July 20, 2021, as a statutory public holiday to celebrate Eid-ul-Adha.

In a statement signed by Ambrose Dery, the Minister of Interior noted, the holiday must be observed throughout the country.

“The general public is hereby informed that Tuesday, 20th July 2021, which marks Eid-ul-Adha, is a statutory public holiday and should be observed as such throughout the country,” the statement added.

Known as “Feast of Sacrifice”, Eid-ul-Adha is an Islamic festival that celebrates the obedience of Ibrahim to sacrifice his son Ismail to God on His command.

The feast honours the willingness of Ibrahim to sacrifice his son Ismail as an act of obedience to God’s command.

Before Ibrahim could sacrifice his son, however, Allah provided a lamb to sacrifice instead.

In commemoration of this intervention, animals are sacrificed ritually. One-third of their meat is consumed by the family offering the sacrifice, while the rest is distributed to the poor and needy. Sweets and gifts are given, and extended family are typically visited and welcomed.

Below is the full statement from the Interior Ministry. 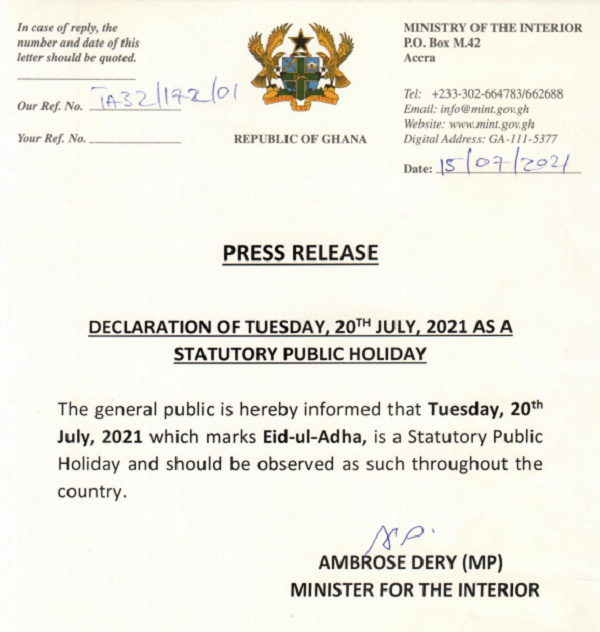 Anybody who knows the CJ will not doubt $5m bribery allegation is a fabrication – Kofi Bentil.