Mustapha Hameed drops another ‘bomb’ on multimedia; says there is an agenda.
Advertisement

Cost of Nana Addo’s foreign trips has nothing to do with national security – Haruna Iddrisu.

The Multimedia Group has been under serious criticisms from the governing New Patriotic Party, and some public officials over the manner at which they produce content about the government. After the Assin North legislator’s [Kennedy Agyapong] outburst at them for allegedly misrepresenting statements he made about their reporter, Erastus Asare Donkor, the Manager for the Accelerated Oil and Gas Capacity (AOGC) programme at the Petroleum Commission, Mustapha Hameed had waded in with a bombshell.

He had accused Joy FM [a subsidiary of Multimedia Group] of having embarked on an agenda to ‘extort’ money from the government through scandalous publication and commendatory. He pinned a post by the media house which hinted on corruption and related offenses committed at the Free Senior High School (FSHS) Secretariat.

Joy FM noted that the Auditor General in its report cited the Secretariat for having misapplied a whopping Nineteen Million Ghana Cedis (GHC 19,000,000.00) of state funds. This the station described as ‘grand’, and a need for them to throw the spotlight for the day.

But Mustapha Hameed described them as ‘shameless people, shameless journalism’, though without any evidence or claim to diffuse what is yet to be discussed. He noted that their [Joy Fm] is to coerce the government to doll out money to them by pursuing these contents.

“Agenda for the day. Shameless people, shameless journalism. If this is what you think will get the government to start dolling out monies to you then you’ll continue to wallow in your shamelessness,” He wrote on Facebook. 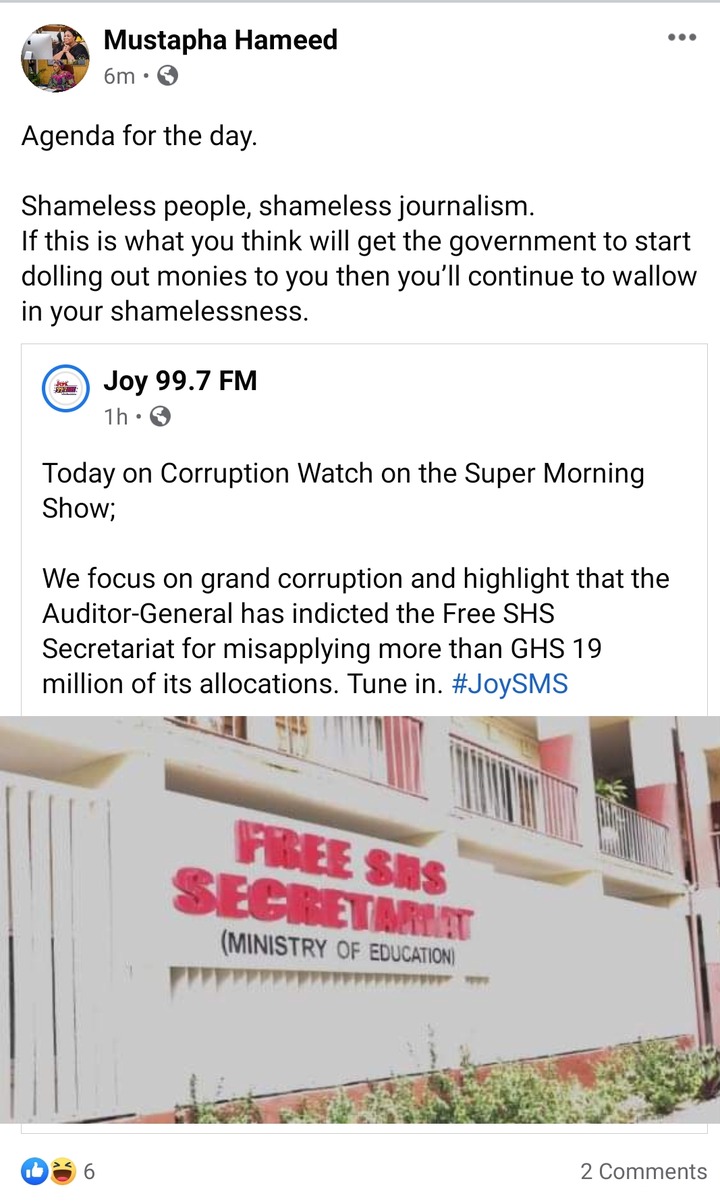 But his comments hasn’t been taken likely by section of Ghanaians, as they feel the media house is doing the right thing keeping the government in check. To many its an accountability mechanism the Multimedia Group had taken under their anti-corruption program.

Some reminded him of similar publications and editorial analysis that were done on the GYEEDA, SADA, and other scandals that were undertaken in the John Dramani Mahama administration. The common language was that as much as there is a precedent in exposing the rots in the system in previous government, there is nothing mischievous about doing same under the Akufo-Addo administration.

You’re a horrendous failure, you have no legacy – Fmr MP slams Akufo-Addo.