9 million people were butchered because a king killed a person and shaved the head of other two. Yes you read it right. Changez Khan, everyone knows his name. He was a warrior who wanted to unite Mongolia and fighting against oppressive Chinese.

Changez Khan once sent his trading caravan to Khwarezmia (Modern day Iran/Persia).The king of Persia has a Governor named Inalchuq. He captured those nearly 500 people and killed all those. When Changez Khan got to know about it, he forgave him considering it was a mistake and sent the king of Persia Al-ad Din Muhammad some gifts and a message.The message was that :-

“I am master of the land of the rising sun while you rule those of setting sun. Let us conclude a firm treaty of friendship and peace.”

This was indeed very peaceful. This message was delivered by 2 Mongols and a Muslim guy to prove his secular credentials. What did the Persians do? They beheaded that Muslim guy and shaved the head of those 2 Mongols and sent back to Changez Khan. This would infuriate any man with balls. And Persians were about to see the size of the Changez’s balls. 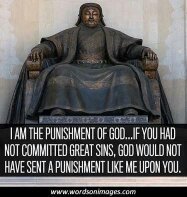 He took it as an insult to him. This incident led Changez Khan to plan one of the most ruthless conquests in the history of mankind. Before this, his entire campaign was to unify all Mongol tribes. He started to raise his army like of Spartans. They were almost 250000 in numbers. He has a very intelligent spy network at that time which always helped in his victories. He attacked Persia with his full force. And he continued to win one by one cities of Persia. After each win He pulled out everyone outside and chopped their heads off. Pyramids of those heads were raised as a sign of Mongol victory.

Changez army was on his bloody best for Urgench which was the birth place of Persian king. 50000 strong Mangol army killed over 1.2 million people. The houses,dams and rivers all were destroyed. He completely wiped off that city from the earth.

At one city Nishapur, he lost his favourite son-in-law Toqchar which upset his daughter badly. At the request of her revenge that every person should get killed in Nishapur. Khan’s army led by his son went on a rampage, killing almost everyone they found. It is said that Mangol Army killed almost 1.5 million people in an hour. Some historians even says that the population of that city was 1.7 million and he killed all those 1.7 million. It sounds ridiculous but it is true. 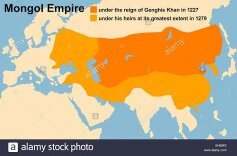 Now it was the term of that Governor who captured and killed those 500 trading caravan. He was captured and molten silver was poured into his eyes and ears. He died. This all massacre estimated to killed 8 million civilians and 1 million Persian army across Persia.

This all happened due to killing of a person and shaved head of other two. These 9-10 million lives could have been saved if that Governor would not have committed that blunder.

It is also being said that Changez Khan killed over 40 million people across whole world, nearly 10% of human population at that time. More than 9 million died due to a small mistake.

It is concluded by researchers that he may have scrubbed 700 million tons of carbon from the earth due to his killings. He was such a badass.