1st, 2nd Ladies salary: Next time feature it in your manifesto – Nana Aba to Akufo-Addo.
Advertisement

The subject of salaries for the First and Second Ladies of the land has spurred public displeasure with many sections of Ghanaians expressing displeasure about the development.

Information Minister, Kojo Oppong-Nkrumah confirmed a new arrangement for spouses of the president and vice president to officially enjoy salaries from the government of Ghana.

According to him, a recommendation by an emolument committee which was approved by the seventh parliament was adopted by government.

He further disclosed that President Nana Addo Dankwa Akufo-Addo in 2019 established a committee chaired by Prof. Yaa Ntiamoa-Baidu to make proposals on allowances paid to wives of the president and his vice.

This amount for the spouses of the first and second gentlemen will be backdated which means they will be paid arrears of the amount from 2017.

Many have since described the move as disappointing and inconsiderate considering the many persons in less fortunate positions who remain impoverished and poor.

Television personality and broadcaster, Nana Aba Anamoah has joined the conversation. She believes Ghanaians should at least have been forewarned about decisions like this when the president and his vice were campaigning for the vote of Ghanaians in the 2016 elections.

“H.E @NAkufoAddo & @MBawumia should have told us before the 2020 elections that they’d be paying their beautiful wives 6 months after winning the election.

“Next time feature it in your manifesto”, she wrote in a Tweet.

This comes following a proposal presented before parliament by Finance Minister, Ken Ofori-Atta for a car loan purchase agreement of US$28 million for MPs.

If approved, each MP will receive an amount of US$100,000 for the purchase of a vehicle which will be sourced from the National Investment Bank. 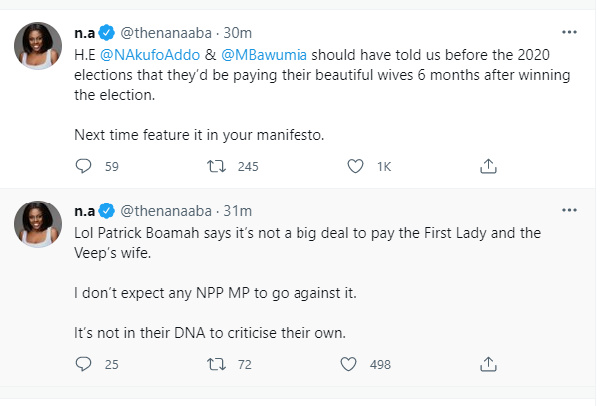 You don’t have the powers to give us justice – Macho Kaaka’s family bounces Ejura committee.