Man accused of beating his girlfriend's 2-year-old son to death when he wet himself on the sofa.

I Was A Party Animal In My Late Teens - Prez Akufo Addo's Daughter Writes.

Twitter Begins Hiring As It Sets Up Operations In Ghana.

Man, 22, picked up by police after narrating his ‘kidnapping’ incident on Akoma FM.

The Student Representative Council of the University for Professional Studies has asked the student body to be careful with movements in and off campus.

The caution comes after two female students of the University were allegedly raped by armed men.

A statement signed by SRC Chairman for UPSA SRC, Prince Nartey Wade, mentioned that the  campus and routes around the University of Professional Studies- Accra (UPSA), were gradually becoming unsafe.

According to the statement, this rape incident is one of the many reports the SRC has received.

The statement also noted that thieves on motorcycles have been snatching monies, phones during the night.

“The SRC is therefore urging the student in “limiting physical cash” and to also limit the use of electronic gadget as they (SRC) are trying to provide security at vantage points to monitor, deter and deal with these crimes”, the statement added.

Read the full statement below: 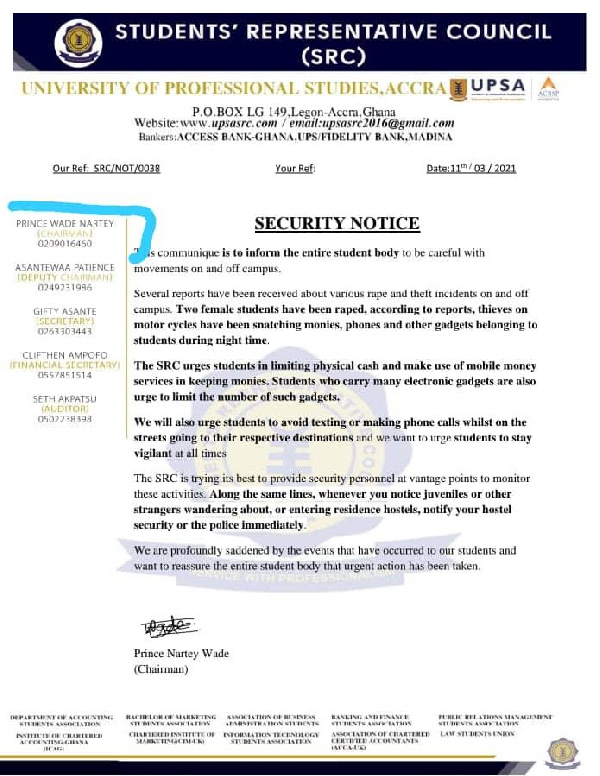 Villagers called out as it’s revealed the ‘sword fish’ caught and eaten in Rivers is actually a Blue Marlin Fish that costs up to $3 million.