Alan Kyeremateng in trouble: He may never be NPP’s flagbearer.

I Will Not Descend To Your Level - Kyei Mensah Replies Boakye Agyarko - (Video).

Has NDC ever picked an Ashanti as presidential candidate? – Kennedy Agyapong quizzes NPP.

If not Parliament where should we do politics? – General Mosquito replies Kyei-Mensah-Bonsu.

Don’t be shy to admit it’s dumsor – Dumelo to govt.

“Akufo-Addo has borrowed to the extent that every single Ghanaian owes GHS10,000” – Sammy Gyamfi speaks (Video).

Omane Boamah recounts Mahama’s achievements which may have attracted Twitter to Ghana.

Stephen Atubiga, a leading member of the National Democratic Congress has revealed that John Mahama’s decision to pick Professor Jane Naana Opoku-Agyemang as running mate worked against their party in the 2020 elections.

According to him, the decision created animosity within the ranks of the party, with some people angry that an ‘outsider’ was picked instead of a grassroots person.

“In the 2020 Elections, the same faceless NDC people who facilitated JDM’s defeat in 2016 came around deceptively to support him finish his last term in 2020 with the hope of getting a running mate coming from any of their blocks,” Atubiga said in a press statement released Saturday.

“Our founder, the late President J.J. Rawlings unambiguously told us that the choice of JDM’s running mate [Prof. Naana Jane Opoku Agyemang] wasn’t his choice……“Remember most of those who contested JDM for the presidential ticket are either grassroots persons or have been in the party longer than JDM.

To mend these divisions, Stephen Atubiga has tabled a number of proposals which he holds could turn the tides in his party’s favour in 2024.

He insists that until these steps are taken by the NDC’s leadership, they will remain in opposition.

“I believe come 2024, Aseidu Nketia (General Mosquito) or Ofosu Ampofo, one of them as a running mate or any one of them as presidential aspirants will not be bad”, stated Atubiga as one of his recommendations.

“My humble advice to any NDC presidential candidate for the 2024 election is to pick the right running mate to guarantee victory for the party. Do well to subject your choice of running with exhaustive consultations to help avoid the 2016 and 2020 debacles”. 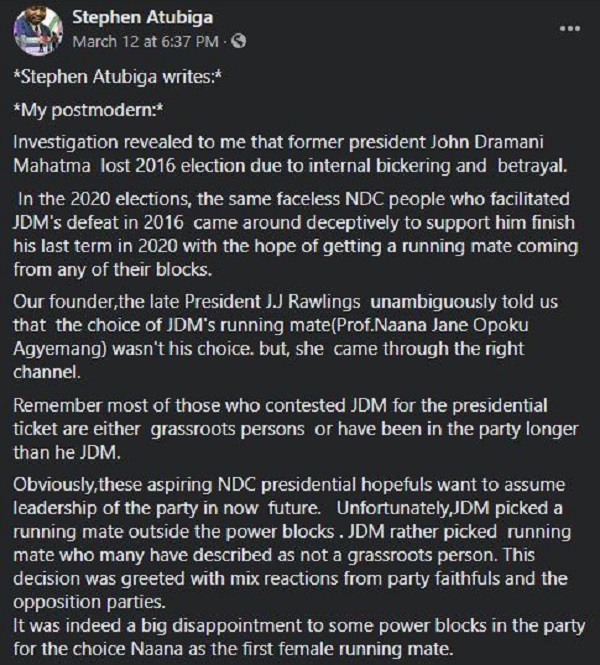 You can’t issue malicious threats against our boss – NDC Communicators to Kyei-Mensah Bonsuh.