Man finds out that his girlfriend had an abortion for another man while living with him.
Advertisement

A Twitter user has narrated how his friend found out that his girlfriend who he lived in same house with, had an abortion for another man.

@Somtosocial said his friend uncovered the act on the morning of today March 15. He tweeted;

My friends babe did abortion for another man while staying in his house He found out this morning. I really don’t know what to say or advice to give. 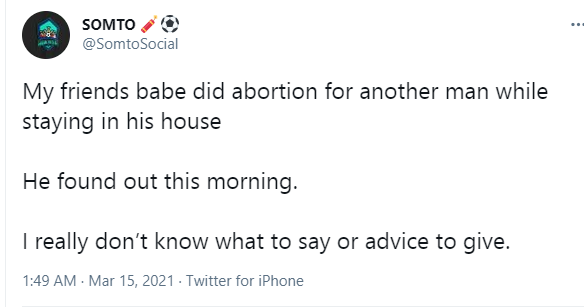 Grammatical errors in your apology letter make you unfit to be publishers – Ablakwa to Badu Nkansah.