Woman confesses to sleeping with her boss and two other men after it was revealed that it was the cause of her husband’s illness and eventual death (watch video).
Advertisement

A video making rounds online captured moment a woman allegedly confessed to sleeping with her boss and two other men after it was revealed that it was the cause of her husband’s illness and eventual death.

Some social media users alleged that she broke the “ibegwu culture” of Ogugu people of Kogi state. The tradition forbids married women from sleeping with other men, and has a punishment of their husbands being inflicted with illness that can lead to their death.

It was further learnt that when the woman allegedly confessed to the acts of infidelity, it was already late as her husband died thereafter.

A Facebook user, Hope Akor took his social media to explain more about this incident.  He wrote;

“All u see in the video is a weak woman

Yes! I understand that,I also had missed feelings when I saw the video but pls take this note: she has confessed to sleeping with her boss in Lagos and two other guys when she visited Abuja, her husband has been down for months till it was realized it’s ibegwu and she followed her husband to the village,confessed to the elders and they had commenced the cleansing process to lift the ibegwu but it was too late, everybody around the video is only upset she’s denying now that she’s before the camera,am not saying it’s best to shame her publicly or not,but the person that died at the cause of her lack of self control is also someones son!

And for those of u asking why did her family allow them humiliate her this way,her family is ashamed of her dids for their also from the same ogugu and sees her act as purely Evil mostly that she’s fully aware of the traditions of the land so that makes her act seen as intentional murder

Pls take note: she’s aware that she will die if she doesn’t open up to her husband which she did and that has shifted the death from her to her husband left for him to report to the elders and save himself or harbor her secret, but this innocent late guy loved his wife so much and refused to say anything as he’s wife keeps begging him to pls keep the secret and save her from shame…….why would u chose ur secret and mare family disgrace to ur husbands life? And why would he(the victim) chose to keep it as secret till it got out of hands knowing fully well he’s life depends on it?

Lastly: ibegwu does not kill for fun,if she was innocent,a mare allegation wouldn’t bring death upon her or her husband,and there is no other channel his husband could die such death if she truly didn’t sleep with any man and if she didn’t tell her husband (to lift the death penalty from her own head),these are the ways of Ibegwu”.

At this point I broke down in tears, she repeatedly told them that she remove her ring as a result of the pain she was feeling wearing it.

We were made to understand that the Ibegwus are spirit guiding the Ogugu tradition, but in her own case they came out live on Facebook with video. Should we call the act from the Ibegwu being on Facebook as technological advancement?

AT THIS POINT ENOUGH IS ENOUGH, WE MAY HIT THE STREET TO FIGHT THIS INJUSTICE IF THE gods ARE NOT ALLOWED TO DO THEIR JOB 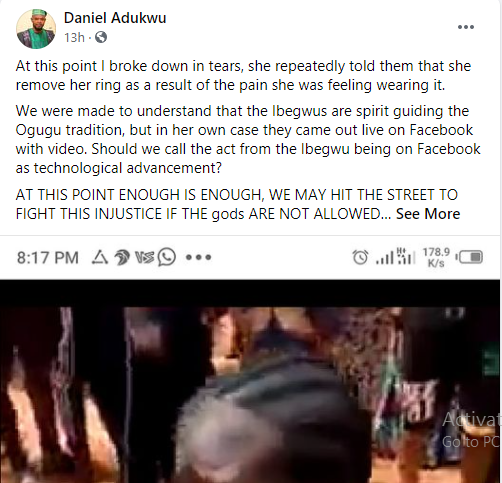