Lightning may have sparked life on Earth.
Advertisement

Millions of lightning strikes may have been just what life needed to begin on Earth, according to a new study.

One of the key ingredients needed for life as we know it is phosphorus — and the multitude of lightning strikes that happened when Earth was young 4 billion years ago may have unlocked the necessary amount of phosphorus to create the foundation for life.
Phosphorus is needed in the molecules that form basic cell structures and cell membranes and even makes up the phosphate backbone of DNA and RNA, said Benjamin Hess, study author and graduate student at Yale University in The Department of Earth & Planetary Sciences.
But this element was elusive on early Earth, trapped inside minerals. 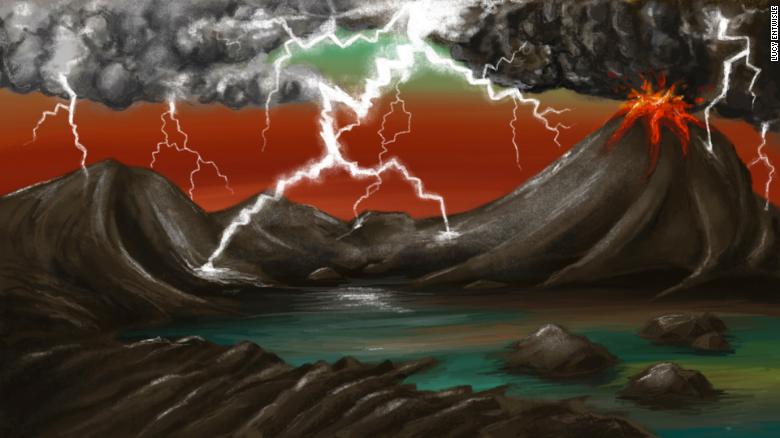 This artist’s rendition of the early Earth environment shows lightning striking volcanic rocks, releasing phosphorus.
“Most phosphorus on early Earth was trapped in minerals that are essentially insoluble and unreactive, meaning they couldn’t be used to make biomolecules needed for life,” Hess said. “Lightning strikes provide a new mechanism for creating phosphorus in a form that can make important compounds for life.” 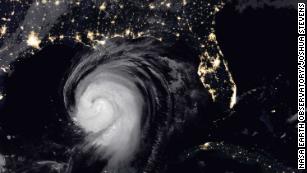 These stunning NASA satellite images capture 2020’s extreme climate events
The study published Tuesday in the journal Nature Communications.
It has long been thought that meteorites delivered the necessary elements for life to appear on Earth. Meteorites have been known to contain schreibersite, a phosphorus mineral that can be dissolved in water. If enough of them crashed into Earth, that schreibersite could have provided the right amount of phosphorus. 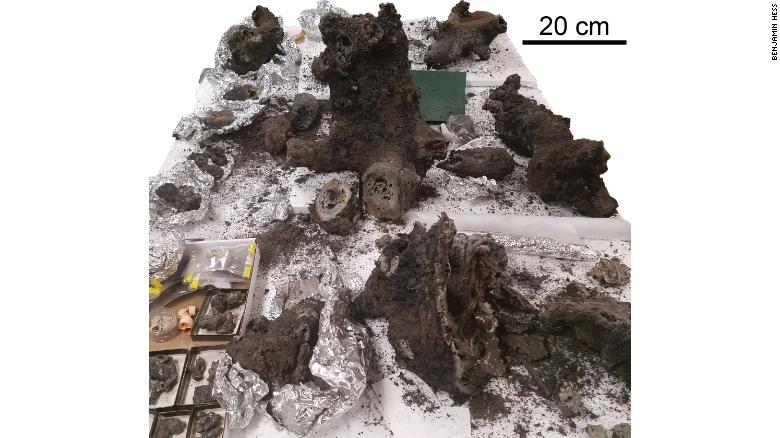 These are pieces of fulgurite analyzed in the study.
However, life began between 3.5 to 4.5 billion years ago, and that’s when fewer meteorites were impacting Earth.
Schreibersite has another source in glasses called fulgurite, otherwise known as the glass that forms when lightning strikes the ground. 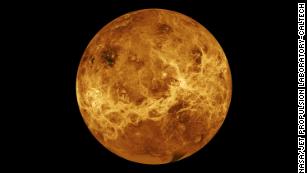 A gas found on Earth that signifies life has been detected in the clouds on Venus
Fulgurite has been found to contain phosphorus released from surface rocks — and it’s soluble.
“Lightning is a mechanism that does not necessarily diminish through time as the commonly accepted source, meteorites, do,” Hess added. “This mechanism may be very important for considering the formation of life on Earth-like planets after meteorite impacts have become rare.”
Lightning has also been a subject of interest for scientists when thinking about life on early Earth, because it leads to the creation of gases like nitrogen oxides, which also played a part in the origin of life.
Hess and his fellow researchers used this existing research to investigate and refine the rate of lightning on early Earth.
On Earth today, we experience about 560 million lightning flashes per year. On early Earth, that number was anywhere between 1 and 5 billion annually, with 100 million to 1 billion of those striking the ground. 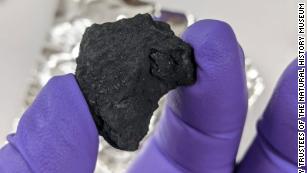 Rare meteorite that fell on UK driveway may contain ‘ingredients for life’
Over a billion years, that could have led to 1 quintillion lightning strikes — and a lot of phosphorus.
Lightning was more prevalent on early Earth because there was more carbon dioxide in the atmosphere. Carbon dioxide contributes to the global temperature, and a higher global temperature causes more frequent and intense thunderstorms, Hess said.
Carbon dioxide levels were elevated on early Earth after a Mars-size object slammed into Earth to create the moon 4.5 billion years ago. This also released a lot of gases from inside Earth, like carbon dioxide — which then became trapped in Earth’s atmosphere and led to more lightning, Hess said.
“Our proposal of lightning strikes as a significant mechanism for creating reactive phosphorus is important for our understanding of the emergence of life because lightning strikes are relatively constant through time,” Hess said.
Understanding the role of lightning strikes as a way of creating usable phosphorous has implications in the search for life beyond Earth.
“Our findings are likely applicable to any planet which has an atmosphere that generates lightning. So long as a planet has a significant amount of lightning, it would have a source of phosphorus needed for the emergence of life,” Hess said.
Related Topics:featured
Up Next

‘I’m saddened by the rising level of corruption’ – Professor Addae-Mensah.