Comedian Derick Kobina Bonney has revealed that a police officer he knows has lost his erectile function after he took the covid-19 vaccine on Saturday.

The Food and Drugs Authority in a statement on Tuesday, March 16, 2021, said it had taken notice of reports of blood clot associated with the AstraZeneca COVID-19 vaccines in some countries but stated that it is yet to record such development in the country.

Fourteen European countries including 12 EU members have now suspended the use of AstraZeneca shots altogether while another five have black-listed specific batches and a handful of governments outside Europe have also pulled the emergency brake.

They said they were pausing the rollout following reports of blood clots in some recipients. The countries stressed that it was a precautionary measure.

In its statement, however, the FDA said its review of the vaccines indicated that it is safe for use and that since it started administering the drug some two weeks ago no adverse effects have been recorded in the country.

The FDA added that it was working with health experts globally to continue to support the vaccine programme and protect public health. The FDA assured the public to have confidence in the vaccine and continue taking it.

But reacting to the FDA’s statement captured in an already published statement, DKB stated that a police officer he knows had lost his erectile potency for close to a week after he took the jab.

“A police officer I know has lost his erection since he took it on Saturday,” he said in a tweet.

Before the commencement of Ghana’s rollout of COVID-19 vaccines, there were rife theories alluding that the jab has the effect of rendering men impotent.

However, experts shot the claim down indicating there was no established link between the vaccines and erectile dysfunction. 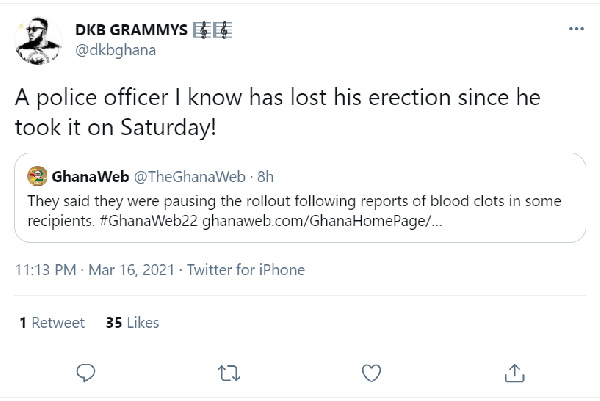 The 4 new artistes taking over the Ghanaian music scene by storm.