•Okudzeto Ablakwa is shocked Ken Ofori-Atta is talking about protecting the public purse when he failed to answer questions on President Akufo-Addo’s trip to France, Belgium and South Africa

Samuel Okudzeto Ablakwa, the Member of Parliament for North Tongu has called out the Finance Minister Ken Ofori-Atta for playing the ostrich over claims that he and the government were committed to protecting the public purse.

Samuel Okudzeto Ablakwa said he found it reprehensible that the minister who in his wisdom evaded the question on the cost of President Akufo-Addo’s trips to France, Belgium and South Africa, will make such claims in front of Ghanaians.

In a Facebook post shortly after the mid-year budget review was read by Ken Ofori-Atta, the North Tongu MP urged Ghanaians to recognize that such statements from appointees of the Akufo-Addo are mere rhetoric and not backed by actions.

“Finance Minister Ken Ofori-Atta has courageously told Parliament as contained in paragraph 6 of his address that he commits to ensuring the protection of the public purse.

‘Very provocative coming from the same Minister who refused after several weeks of stonewalling to disclose the cost of President Akufo-Addo’s infamous extravagant travels. Recall he now hides under the cloak of national security.

“Many Ghanaians must have been either incensed or simply scoffed at the reference to protecting the public purse – a purse we can no longer find.

“We must come to the irresistible conclusion that pledges mean nothing to current government officials. Their assurances are clearly not worth the paper they are written on neither do they have any modicum of respect for the people who put them in office,” he posted on Facebook.

In paragraph 6 of the mid-year budget review, Ken Ofori-Atta expressed gratitude to Parliament for the postponement of his vetting and also reiterated his commitment to the protection of the public purse.

“Again, permit me to express my heartfelt gratitude to this august House for your patience and forbearance in postponing my vetting and subsequent approval, giving me time to recuperate. I recognise the historic nature of this second term, and as indicated at my vetting, I commit to ensuring the protection of the public purse and the transformation of the economy,” it reads. 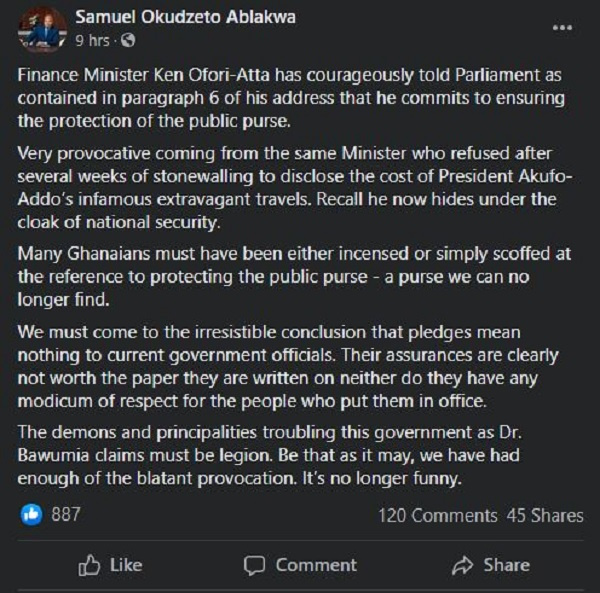