I Will Not Descend To Your Level - Kyei Mensah Replies Boakye Agyarko - (Video).

Has NDC ever picked an Ashanti as presidential candidate? – Kennedy Agyapong quizzes NPP.

If not Parliament where should we do politics? – General Mosquito replies Kyei-Mensah-Bonsu.

Don’t be shy to admit it’s dumsor – Dumelo to govt.

“Akufo-Addo has borrowed to the extent that every single Ghanaian owes GHS10,000” – Sammy Gyamfi speaks (Video).

Omane Boamah recounts Mahama’s achievements which may have attracted Twitter to Ghana.

Asiedu Nketia recalls how he disagreed with Freddie Blay at the Appointments Committee.

Dr Lloyd Amoah of the University of Ghana has criticized the Akufo-Addo administration over the tension between the Board of the Audit Service and the Auditor General, Daniel Yao Domelevo.

This comes after the board said in a three-page letter addressed to Mr. Domelevo on Tuesday, March 2, just a day before he resumes work after proceeding on compulsorily leave, that he was due for retirement on June 1, 2020.

In providing details to its claim, the Audit Service Board said in a letter dated 26th February 2021 that, “Records at the Social Security and National Insurance Trust (SSNIT) completed and signed by you indicate your date of birth as of 1st June 1960 when you joined the scheme on 1st October 1978.

“The records show that you stated your tribe as Togolese and a non-Ghanaian. That your home town is Agbatofe.”

“On 25th October 1992, you completed and signed a SSNIT Change of Beneficiary Nomination form, stating your nationality as a Ghanaian and your home town as Ada in the Greater Accra Region.

“The date of birth on your Ghanaian passport number A45800, issued on 28th February 1996 is 1st June 1961. That place of birth is stated as Kumasi, Ashanti Region,” the correspondence stated.

The Board said Mr. Domelevo’s reference to a Parish Priest and provision of his contact for further verification of his date of birth is not admissible.

“Observation of your responses and explanations contained in your above reference letter make your date of birth and Ghanaian nationality even more doubtful and clearly establishes that you have made false statements contrary to law.”

The Board consequently insisted that Mr. Domelevo was due for compulsory retirement on June 1, 2020, and was in fact not a Ghanaian but a Togolese.

“Records made available to the Board indicate that your date of retirement was 1st June 2020 and as far as the Audit Service is concerned you are deemed to have retired,” it noted.

In a Facebook post, a livid Dr Amoah who is the Director of the Centre for Asian Studies-University of Ghana said “This administration has made a silly habit of not letting sleeping dogs lie: PUB and now Domelovo. YOOOO!!”

In another post on the same matter, he said “It was such foolery that claimed that Nkrumah was Ivorian. We are back to SQUARE ONE. PAY ATTENTION.”

Executive Director of the Ghana Centre for Democratic Development (CDD-Ghana) Professor H Kwesi Prempeh also described the action of the Board of the Audit Service against the Auditor General Mr Daniel Domelevo as autocratic pettiness.

Prof Prempeh commenting on a Facebook post by Dr Lloyd Amoah said “Just heard this: Dude was forced out on leave as a Ghanaian, only to return as a Togolese due for retirement. The height of autocratic pettiness.” 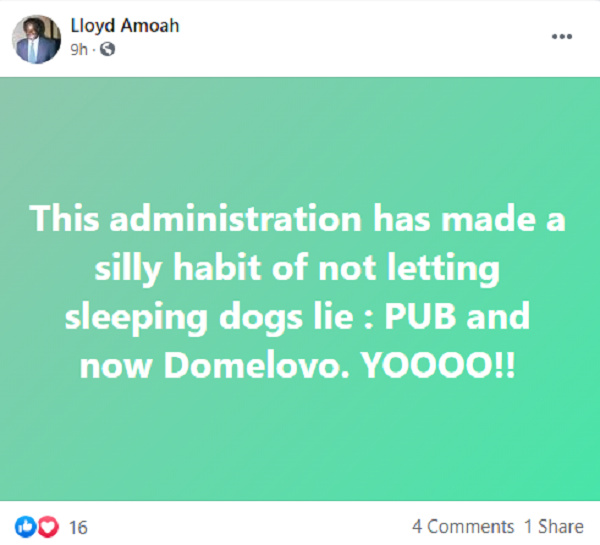 Stop breaking up NPP; I’ll be first casualty if we go into opposition – Kennedy Agyapong.