If Bill Gates donates so much of his money, how is he still one of the top three richest people in the world?
Advertisement

Kufour did not agree on 193 acres of land for Owoo Family – Lands Ministry.

Bill Gates isn’t really that interested in money. He said, as reported by the Seattle Times: “I can understand about having millions of dollars. There’s meaningful freedom that comes with that, but once you get much beyond that I have to tell you, it’s the same hamburger.”

However, he keeps getting richer for two reasons.

Second, he doesn’t even think about it. Since 1995, he has had a personal money manager called Michael Larson. It’s his job to make Gates richer, and he’s done it extremely well.

Gates has made a small number of investments outside that, but his main purpose has been to support biotech companies.

Gates doesn’t have any expensive hobbies like buying sports clubs and huge yachts (like Paul Allen) or sending rockets into space (like Elon Musk and Jeff Bezos). He likes reading books, playing bridge with Warren Buffett, playing golf, and spending time with his family.

Gates actually drove his kids to school, which is one way he spent time with them. How many multi-billionaire CEOs have ever done that? 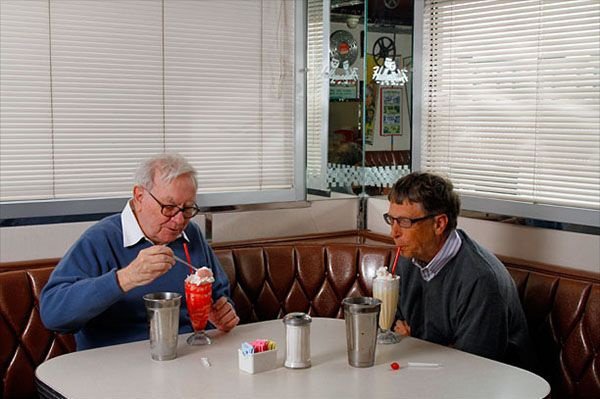 Gates and Buffett are worth around $90 billion each. Gates has given away about $35 billion and Buffett more than $46 billion.

For more on Larson, see a Fortune story from 1999: One Family’s Finances: How Bill Gates Invests His Money Like a lot of people, he’s got stocks, bonds, and a money manager. But there are differences. For one thing, his personal portfolio is the size of a large mutual fund

Mind-blowing facts about the human brain.