Mr. Mahama in an interview on URA Radio in Bolgatanga said the Electoral Commission was refusing to receive the proposals asking the NDC to rather send the proposals to IPAC, an advisory body of all political party.

This, the 2020 Presidential Candidate of the NDC said is not practicable especially since IPAC meets at the EC office. Interestingly, the NDC is boycotting IPAC meetings hence the difficult to have the issue discussed at such a forum.

The EC, Mr Mahama noted, houses the IPAC and can receive the proposals and present them at the next IPAC meeting for consideration.

However, in a letter dated 9th July 2021 sighted by MyNewsGhana, the EC acknowledged receipt of the proposals and promised to review them.

The EC has promised to “review the contents” of the National Democratic Congress (NDC) position paper on electoral reforms when it received it back in July contrary to reports that it refused to take it.

The letter addressed to the General Secretary of the NDC stated that” I bring you warm greetings from the Electoral Commission and trust that this letter finds you well. I write to acknowledge receipt of your letter dated 28th June 2021 with reference under NDC/HQ/69/VOL.2/299 on the above subject”
“The Commission will review the contents of your Position Paper,” the letter signed by Samuel Tettey, deputy chairman Operations of the EC said.

Below is the letter 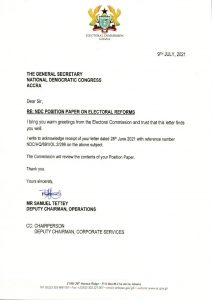