Passenger collapses and dies on flight from Johannesburg to Bulawayo in Zimbabwe.
Advertisement

Woman allegedly stabs her housemaid after she found her sitting on husband's lap.

25-year-old Nigerian woman strangled to death by her Ghanaian ex-boyfriend in Italy.

Sputnik V: The more you defend, the worse the issues become – Akandoh to Gov’t.

A sad incident occurred in an Airlink flight on Monday May 24, as a passenger collapsed and died during the trip.

ZimLive reported that the deceased who was one of the passengers on the Airlink Embraer 170-100LR plane which was travelling from Johannesburg to Bulawayo in Zimbabwe, collapsed and died mid way into flight.

Body of the deceased was removed by health personnel after the plane landed at Joshua Mqabuko Nkomo International Airport.  Confirming the mid-flight death, the airport manager Passmore Dewa told the publication;

“I confirm that we had an unfortunate incident where a male passenger died mid-air, which was confirmed once the plane landed. We will get reports from the airline, law enforcement and also health authorities into the incident which will answer questions over how the passenger died.”

Airlink also confirmed the sad incident and extended its heartfelt sympathies and condolences to the customer’s loved ones.

Airlink sadly confirms that a customer passed away while onboard flight 4Z110 from Johannesburg to Bulawayo today. We extend our heartfelt sympathies and condolences to the customer’s loved ones. 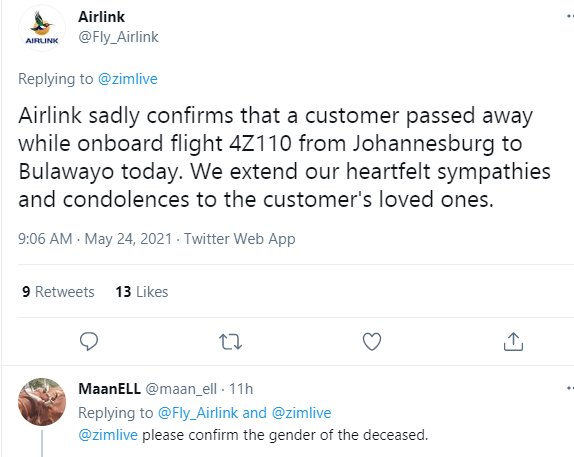 ‘Our goal is to institutionalise the ‘culture of protest’ in Ghana’ – #FixTheCountry convenors.