Dr. Matthew Opoku Prempeh, born 23 May 1968 is the current Energy Minister of Ghana.

As a Ghana parliamentarian, he represents Manhyia South in Kumasi, formerly representing Manhyia. He was first elected to parliament in 2008 and is a member of the New Patriotic Party.

He was born on 23 May 1968. Prempeh studied Human Biology and Medicine at Kwame Nkrumah University of Science and Technology, later continuing post-graduate studies at the Netherlands Institute of Health Sciences and the Kennedy School of Government at Harvard University.

Prior to parliament, he served as CEO of Keyedmap Security Services Limited from 2004 to 2009 and as a member of the Royal College of Physicians and Surgeons of the United Kingdom from 1999 to 2003. He is also a medical doctor/ health worker.

He identifies as a Christian and is a nephew of the former Ghanaian president, John Kufuor.

In May, 2017, President Nana Akufo-Addo named Matthew Opoku Prempeh as part of nineteen ministers who would form his cabinet. The names of the 19 ministers were submitted the Parliament of Ghana and announced by the Speaker of the House, Rt. Hon. Prof. Mike Ocquaye. As a Cabinet minister, Matthew Opoku Prempeh is one of the Key Minsters of the president and is to aid in key decision making activities in the country.

Due to his sterling performance as Education Minister, successfully implementing the largest social intervention policy in the history of Ghana, Free SHS he was appointed to the Energy Minister to address the challenges in the power sector particularly dumsor

The workaholic Minister has taken unto his official Facebook page to tell God how grateful he is for all the love and protection He has given unto him. He took his quotation from Psalm 3:3 which states that “But you, LORD, are a shield around me, my glory, the One who lifts my head high.”

He said that over the decade, the Lord has remained faithful to him and protected him from all the attacks of the enemy. It is not easy to become a Christian. The Holy Scriptures made us understand we do not wrestle against flesh and blood but against principalities, rulers of the darkness of this world among other unseen enemies.

In view of that, Hon. Dr. Mathew Opoku Prempeh believes he needs to thank his creator because when he looks back and sees what the Lord has done for him, he has nothing to say but to thank him for his abundance of grace upon his life.

This is what Dr. Mathew Opoku Prempeh wrote on his official Facebook page:

“On this special day, as I enter another year of my life, I look back through time with a bountiful sacrifice of thanksgiving, for it is by His divine grace that I still am. Over the decades, He has remained faithful – my source of joy in good times and my rock when things seemed bleak and the tempest raged around me.

As I reflect on His word on this day, I am inspired by the Psalmist’s words of joy in Psalm 3:3 and I lift my head high as I look into the future, safe in the knowledge that He is my shield and my glory. Thank you, Lord, for this day and every day”. 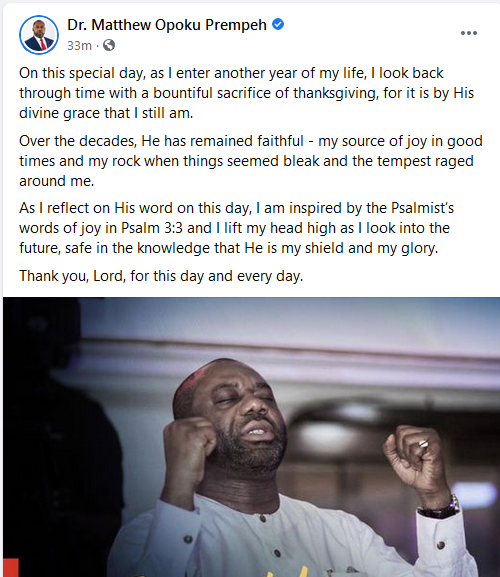