Sputnik V: I bet my manhood you wouldn’t have paid a cent if Ghana was your company – Manasseh Azure to Ofori Atta.
Advertisement

While some cross-section of Ghanaians remain on the case of Health Minister, Kwaku Agyeman-Manu for his role in government’s payment of over $2 million for overpriced Sputnik V vaccines, others have extended the list of culprits in the botched contract to include the Finance Minister, Ken Ofori Atta.

The health minister has been under pressure to resign or be sacked by the President over the vaccine contract but according to investigative journalist, Manasseh Azure Awuni, the finance minister deserves to be blamed as much as Mr Agyeman-Manu is being hounded.

“Agyeman-Manu, says he did not know that the Sheikh had been paid. His attention was drawn to it after he appeared before the parliamentary committee probing the shady deal.

“So, on whose instruction and based on what supporting documents did the Ministry of Finance process and authorise payment to the Sheikh?”

“Is it possible to go ahead and pay a third-party contractor without communication and authorisation from the ministry that is actually doing the procurement? And is it normal that, after the payment, your ministry did not communicate to the Ministry of Health, on whose behalf you made the payment?” he questioned in a Facebook post.

In his barrage of questions directed at the Finance Minister, Manasseh dared Mr Ofori-Atta to provide answers to his questions while sharing his belief that the Minister would have conducted due diligence in his duty if he was acting as the manager of his own company.

“You are an astute businessman, and I can bet with my manhood that if Ghana were your own company, you wouldn’t pay a cent without the necessary checks, supporting documents and communication with the official in the department that is procuring the goods.”

“Ghanaians will be happy to hear from your ministry. The Health Minister’s claims indict the Ministry of Finance. Are his claims accurate or not? Did you pay without his knowledge? And did you not communicate the payment to him after paying without his knowledge?” Manasseh further questioned.

Meanwhile, the health minister has written to the middleman who was supposed to oversee the supply of some 300,000 doses of Sputnik V vaccines, Sheikh Al Maktoum, to refund the cost of unsupplied doses out of the $2,470,00 paid as initial payment for the vaccines.

This comes after a Parliamentary ad hoc committee established that some 50% of the negotiated amount for the vaccines had been paid to the middleman by the Ministry and thus directed the Minister to cause a refund of the amount.
Sheikh Al Maktoum in a reply to the Minister has indicated his willingness to refund the amount of $2,470,000 to the state. 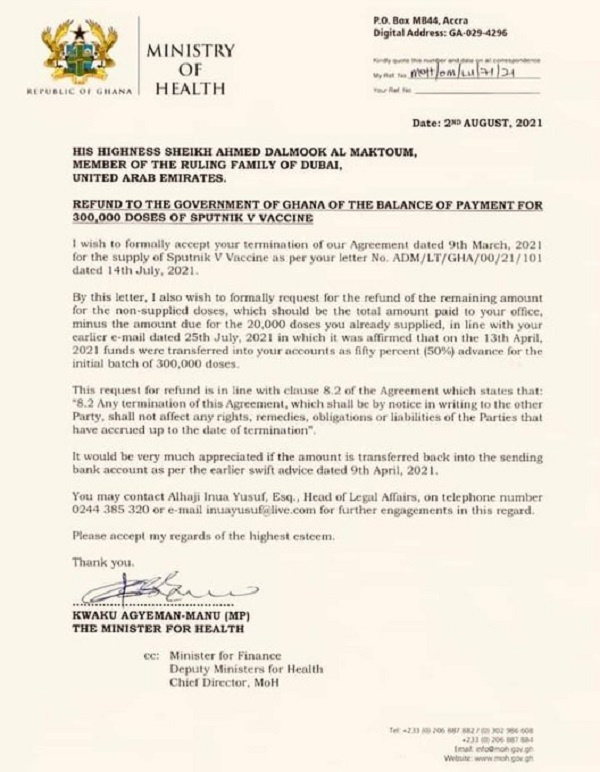 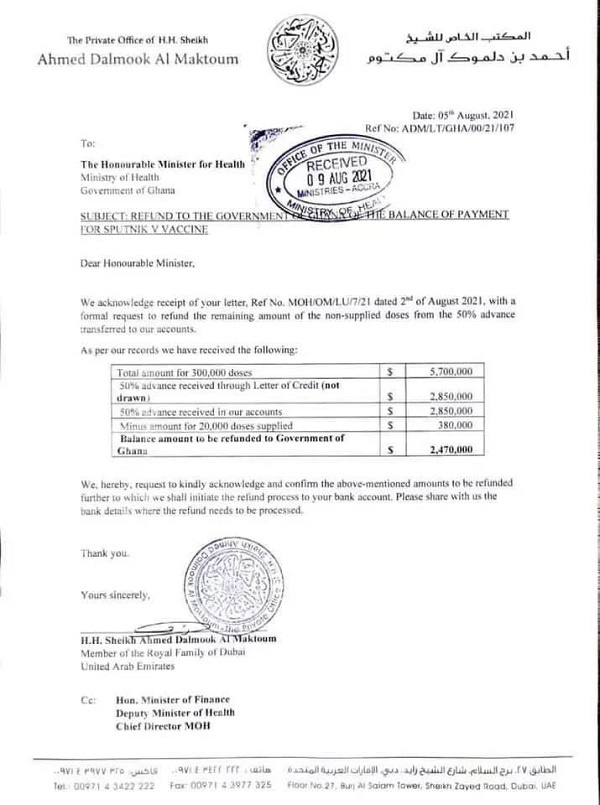