The extortion is too much! - Allotey Jacobs reports Cape Coast police to IGP.
Advertisement

‘Mahama should kneel in front of Attah Mills tombstone and beg for forgiveness’ – Koku Anyidoho.

2 popular men who have wept for Akuapem Poloo - (Video).

All teachers asked to register for license, failure means disqualification.

‘I killed him because I did not want to pay the ₵1,400 he lent me’ — Suspect confesses.

In a post on Facebook, he described as “too much” the rate at which the officers extort monies from drivers who ply that stretch.

“Mr IGP the Extortion @ the Cape Coast Mempeasem barrier is too much,” he wrote.

Persistent armed robbery attacks within the Cape Coast Municipality is what compelled the Police Administration to mount the barriers and checkpoints to clamp down on criminal activities in the city.

But Allotey Jacobs indicated there has been a reduction of the robbery incidents following the introduction of the tricycle (aboboyaa/pragia) business.

He, however, posited that it makes no sense for the police to mount a barrier at that very spot when there are existing ones at Jukwa, Oguaa Kuma, Abeadze Dominase amongst others.

He added that the development is bringing the name of the Service into disrepute and therefore called out on the IGP to swiftly intervene. 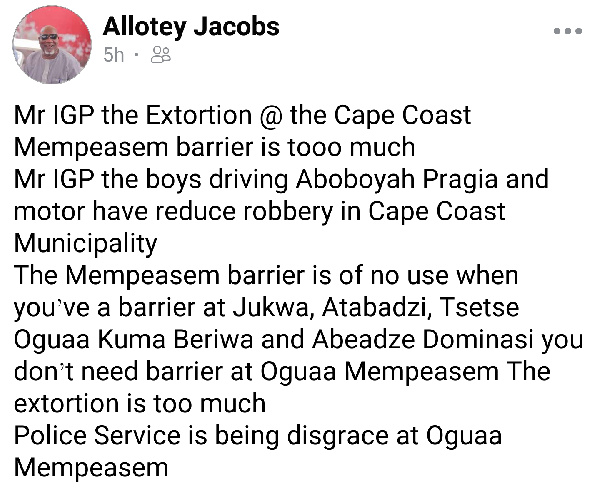 You were gossiping with Domelevo – Adom-Otchere chastises CSOs (watch video).