The true cost of arming Ukraine to fight the Russian invasion.
Advertisement

'We don't have five million players like this' - Klopp praises Alcantara.

Putin threatens to cut off energy supply to 'unfriendly countries' if they don't pay for it in Rubles rather than Euros.

On February 24th 2022, Russia launched a full-scale invasion of neighbouring Ukraine. Fighting has since reached the capital of Kyiv, and while it is impossible to verify, Ukraine’s State Emergency Service has claimed more than 2,000 civilians have died during the crisis.

The actions of Russia’s military and government have been globally condemned by the international community, and a raft of sanctions have been deployed, with the hope of deterring further aggression by destabilising the country’s economy. While sanctions have traditionally done little to put the Vladimir Putin regime off its expansionist ambitions – but alongside the military costs of this particular course of action, they may well have a wider impact this time.

Ukraine’s Deputy Defence Minister, Hanna Malyar, has previously taken to Facebook to claim that Russian forces have lost close to 5,000 servicemen during the invasion. While she added that the numbers needed to be clarified, she also suggested Russian troops had lost around 146 tanks, 27 aircraft and 26 helicopters. 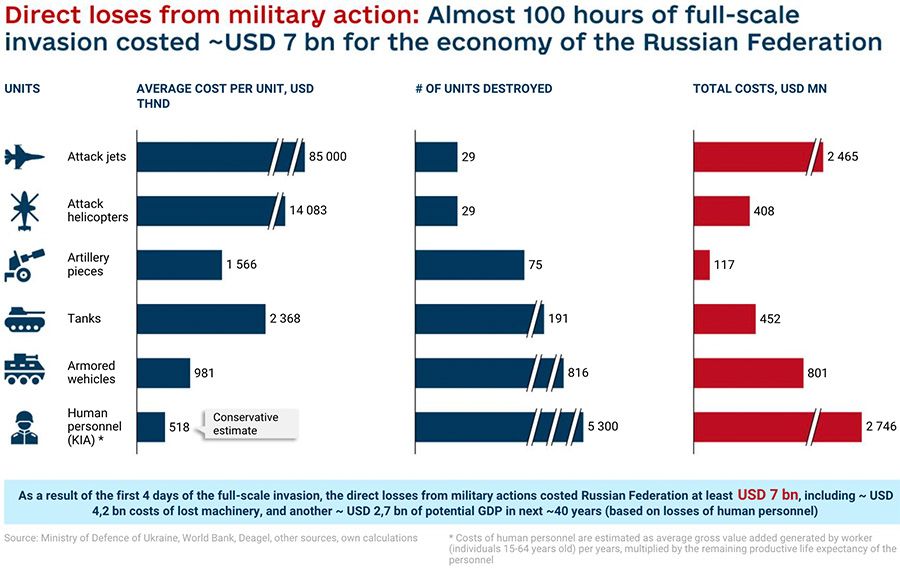 Shedding light into the true cost of the invasion on Russia’s war chest is one of the most debated topics. Injecting guidance into the debate, a new study by the Centre for Economic Recovery, consulting firm Civitta and EasyBusiness has delivered a rapid assessment of the costs of the war for the Russian economy, finding that – even according to the most conservative estimates – the country is bleeding money.

The direct losses from the war alone – including liquidated military equipment and casualties among personnel – have in the first 5 days cost Russia about $7 billion. Of this, the loss of human lives alone is forecast to account for $2.7 billion in lost GDP over the coming years.

Beyond this, the scale of the mobilisation – including its logistics, personnel, ammunition, fuel, rocket launches, and so on – will cost more money each day. As a result, according to the researchers, the daily cost of war for Russia is “likely to exceed $20 billion” as the invasion scales.

Beyond the military cost

This is of course just part of the ‘damage’ Russia will incur. With the price of the rouble having crashed to a historic low amid international sanctions, and a (partial) ban on international transfers to the Western world, the country’s economy is crumbing.

Russian companies are rapidly losing market capitalisation, and with new limitations on government bonds’ trading and the freeze of central bank assets, it has become very difficult for Russia’s authorities to maintain macro stability and service the country’s sovereign debt.

Meanwhile, trade restrictions will take a huge toll on Russia’s energy-dependent economy. Sanctions have already been imposed on Nord Stream 2 leading to lost future revenues. The ban on high-tech products’ import will impact value chains in the medium- and long-term. For ordinary Russians, this will lead to inflation and reduced purchasing power – pushing millions into poverty, and threatening a deep recession.

Related Topics:featuredThe true cost of arming Ukraine to fight the Russian invasion
Up Next

Another Russian Lieutenant-General killed in Ukraine.