Stop critizing legend like Sonnie Badu because he is putting Ghana on the map – Propet Nigel Gaisie.

Your son is a drug addict because of your sins; - Reverend Obofour tells Nana Agradaa (Video).

Samuel Okudzeto Ablakwa, the Member of Parliament for North Tongu charged Ghanaians to speak against all forms of abuse in relationships.

In a social media post, Okudzeto Ablakwa urged the public and institutions to find ways to normalize the act of partners, particularly females, reporting their abusive partners.

The North Tongu MP per his post is appalled by the alleged killing of a lady by his partner at Akatsi North in the Volta Region.

“Horrifying and heart-wrenching times not just for our daughters, sisters and wives; we must all be outraged that physical and emotional violence against women continues to this day.

“There can be absolutely no justification to lift a hand against a spouse. Real men use their strength to protect their partners not harm them.”

“We must strongly encourage ladies to boldly resist and report domestic violence without the slightest delay. Better to leave and live than to stay and succumb.”

Okudzeto sent condolences to families whose relatives have been victims of physical abuse.

He prayed that peace never comes the way of perpetrators and hope that the law enforcement agencies will deal ruthlessly with such people.

“Our deep sympathies and prayers are with all bereaved families including the many victims who escape the lenses of the media.”

“May the perpetrators never find peace and when they are finally found out, may their earthly punishment serve as sufficient deterrence,” he concluded.

Okudzeto’s outburst is in relation to the alleged murder of one Elizabeth Yesutor by her boyfriend Philip Caezar Kumah, who is said to be a staff of the Youth Employment Authority.

Official police statement indicates the deceased might have died as a result of constant physical abuse.

“I had background information on the issue and so I asked the victim to report to the police but that didn’t happen. The gentleman is now in our custody and hopefully, we’ll be going to court today, then we’ll see what happens.

“In one such case, she was hospitalized but after she gained her health back, she went to withdraw the case. There have been various instances where he had abused this lady,” Sgt. Dogbatse told Francis Abban on the Morning Starr Thursday.

The victim died at the Ho teaching Hospital on Monday, March 8, 2021. 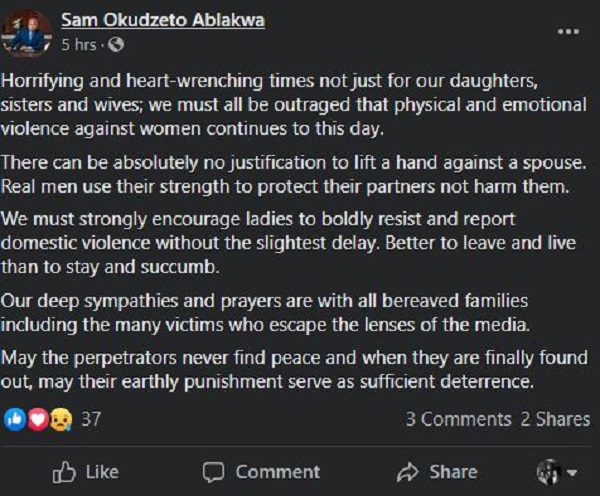 Ras Mubarak’s ex-wife reveals how society, family worked against her for voicing out against domestic abuse.