Did you know this about Prempeh College, Abuakwa, Adisco, and others?
Advertisement

We are still highlighting unique things that mark the heritage of Ghana as the country marks the Ghana Month.

GhanaWeb has throughout the period, highlighted the names and history behind some places, towns, tourist sites and others.

Over the weekend, we picked some 5 schools and talked about the history behind their names, motto, formation among others and as promised, we continue.

There are many others to follow, but let’s take a look at these 6 for now.

In no particular order:

It is located in the Ashanti Regional capital; Kumasi and was originally established to take care of the educational needs of the indigenes there. 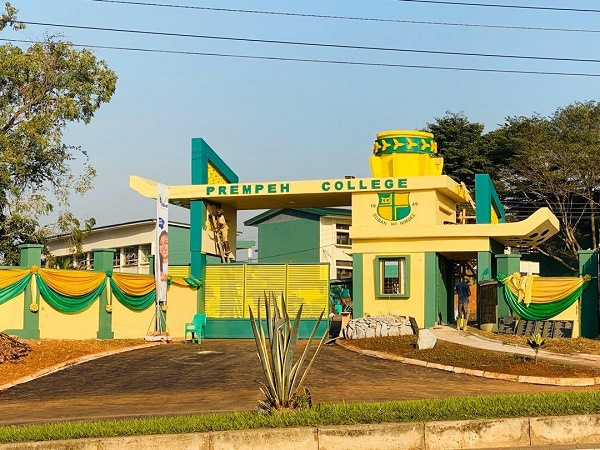 Prempeh College was established in February 1949, by the then-Gold Coast government in collaboration with the Methodist and Presbyterian missionaries who already had established schools like the Wesley Girls High School and the Presbyterian Boys Secondary School in Krobo-Odumase, and the Ashanti Royal Kingdom.

Until 1949, there was no government-assisted secondary school in Ashanti region and the northern sector of Ghana. Most students had to travel to the coastal areas of Ghana to attend established schools such as Achimota School, Mfantsipim school and others.

In 1949, fifty boys from Mfantsipim School and their headmaster, Rev. Sidney N. Pearson commenced the college. The school was designed by renowned British modernist Architect Maxwell Fry and his wife Jane Drew.

The College was incorporated into the Asante Confederacy by Asantehene Sir Osei Agyemang Prempeh II, it has produced most of the men who compose the mass of our Chieftaincy institution – From Kumawuhene, Essumajahene, Akyerensuahene, Akyempemhene of Asante.

“Suban Ne Nimdee” is the motto of the school, it means; Character and Integrity and Old students of the school are known as AMANFOO.

Yaa Asantewaa Girls School began with some 70 students and was established in 1960. It is an all-girls boarding school located in Tanoso in the Ashanti Region. 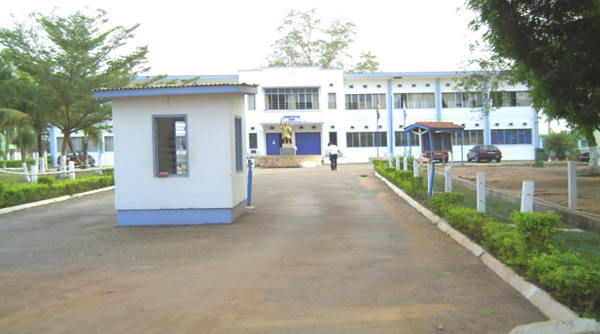 Its name can be traced to the legendary heroine and Queen Mother of Ejisu,
Yaa Asantewaa who has been credited with the bravery she exhibited, by leading the Ashanti people into a battle against the British people.

Though the school has had a number of headmistresses, the third, Madam Tetteh has been credited for much of the success and discipline that turned most of the girls into disciplined women. Her phrase “I’m teaching you girls to be good housewives” will forever go down to the School’s history.

However, in 1978, the students rebelled against her and demanded that the Schools’ priority should also be focused on first class education coupled with the discipline.

The school’s motto is ‘love and service’ and stems from their belief that education is relevant only if it is geared towards love and service to mankind. The slogan ‘Adehyee’ to which the ladies respond; “Emaa Akukudurofoo” emerged from the fact that the school is linked with the royal stool of Ejisu.

Students of the school are linked in a unique way to the Ejisu stool and are considered daughters and granddaughters. The then-King of Ashanti, Otumfuo Nana Osei Tutu Agyeman Prempeh II consulted some of the chiefs in the area where the school would be located to give land for the institution.

Abuakwa State College, popularly known as Abusco is a mixed school, located at Kibi in the Eastern Region of Ghana. 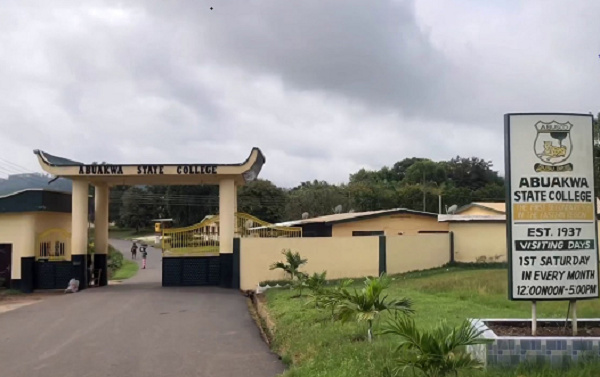 In 1936, some three elders of the Methodist Church at Asafo-Akyem, Okai, Otchere and Addo Atkins, decided to establish the school as an Upper school to help groom students who wanted to sit the then Junior Cambridge Examination. They did this in consultation with one Fred Adae who had then been teaching at the Mfantsipim School in the Central Region.

They subsequently sought the guidance and consent of Nana Sir Ofori Attah the Okyenhene about their decision, upon the advice of Fred Adae. Having gained the royal consent and support of the Okyenhene who decided to bear the cost of the running of the school, the school was established.

According to Henry Kwadwo Amoako, a renowned education researcher, classes began in the rooms vacated by the middle school and boarders were housed in a section of Mr. Okai’s house, no females were included at the time.

A.E.K. Ofori Atta, a former headmaster of the school who later became a cabinet minister in the First Republic got involved and supported the idea.

Ofori-Atta however suggested that the school should not only promote the interests of the pioneering Methodist Elders of Asafo, but should serve the interest of the whole Akyem Abuakwa State as a state school. He also advocated for the transfer of the school from Asafo Akyem to Kyebi, the capital town of Akyem Abuakwa, close to a hospital which will position students closer for health care and treatment when the need arose.

Ofori-Atta’s suggestions won the blessing of the then Okyenhene and was relocated to Kyebi in 1937. He laid the first foundation and his private house; a 2-storey building known as Guggisberg Villa was turned into two dormitories.

The school was named Abuakwa State College to emphasize the point that it was an institution for the whole of Akyem Abuakwa State. This was after Ofori-Atta rejected suggestions by the Okyeman Council that it should be named after him; “Nana Sir Ofori Atta’s Memorial School”.

The school’s “Susubiribi” motto stems from an Akyem word which has several meanings including to think positively, and to think ahead. Asafo Abuakwa State College is the only high school in the Eastern Region with Royal lineage. The products of the Abuakwa State College are referred to as Yaanom (Abuscodians).

Bishop Herman College, popularly known as BIHECO was founded on February 28, 1952 at Kpando, its current location. It was established as one of the schools established by then Keta Diocese of the Catholic Church to plant the Catholic faith in the community. 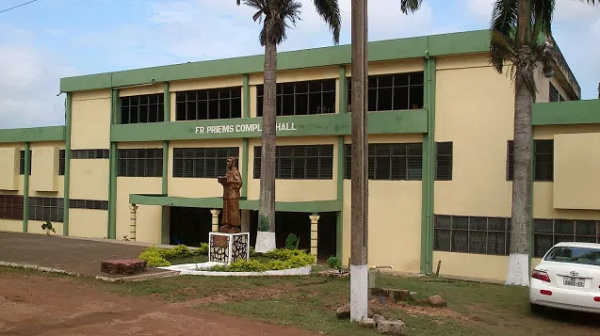 The school was named after the Diocese; Bishop Augustine Herman who was a Frenchman, to honour his memory. It was established as a boys’ secondary boarding school.

During his lifetime, the personal motto of Augustine Herman was St Paul’s words; “Sicut Miles Christi”, one which has come to stay with the school as its current motto. It means “As a Soldier of Christ”.

The school started in the premises of the Roman Catholic Mission, Kpando (Gabi) and moved to its present location on the Aloryi Hills in 1954. It was originally a private mission school when the first batch of students completed their School Certificate course from 1952 to 1955.

Tamale Senior High School is located in the Northern Region of Ghana, specifically, its capital Tamale. 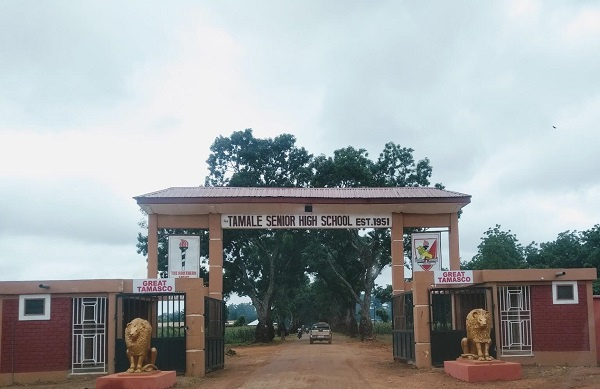 The school which is mixed, was established in 1951 by the colonial administration as the premier institution for secondary education in the Northern sector, to provide equal opportunities for youth in the area to acquire knowledge and skills, and to bring the Northern sector which was then behind in education, to par with the Southern sector.

It was previously known as the Government Secondary School.

The school, now known as TAMASCO, is the second Secondary education institution, established in Northern Ghana.

The school, unlike many others, started with a broad curriculum, with subjects including the English Language, Mathematics, Science, Geography, History, Latin, Agriculture, Carpentry, Masonry, Art and Craft, Music and Metal work.
Dagbani and French were later added to it.

Over time, it has positioned itself as the intellectual pride of the northern sector hence its name, the “Northern Light”.

Products of the school are known as Tamascans. The school’s motto; “Fortiter, fideliter and feliciter” translates; bravery (fortitude), faithfully (fidelity) and happiness (felicity).

This is an all-boys school located in the Central Region of Ghana, in the capital; Cape Coast. It was founded on January 4, 1910 and modelled after a typical English Public School and is the second oldest secondary school in Ghana. 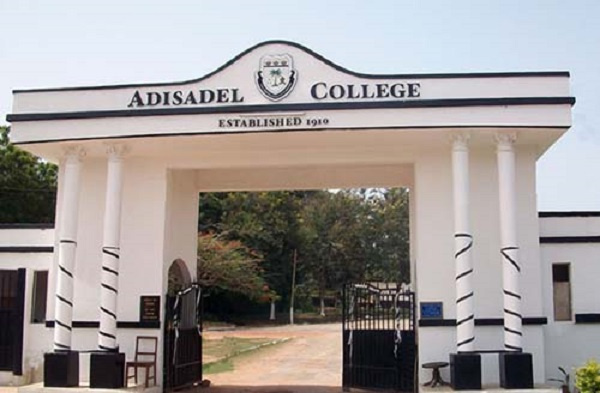 The school was originally named “Society for the Propagation of the Gospel Grammar School” and later became the “St. Nicholas’ Grammar school.

Adisadel was established in a storey building at Topp Yard, near Christ Church in Cape Coast. It began with 29 boys and grew steadily to its current population; some over 2000 boys.

The school’s Founder was the Right Reverend Dr. Nathaniel Temple Hamlyn, then Anglican Bishop of Accra, whose aim was to provide for male wards of Anglican parents, opportunities of education and to help churn out trained boys for the Church’s work.

It later became Adisadel College, which today is shortened to become; “Adisco”. There have been debates about the origin of its name Adisadel. The first narration says there was an English nurse who lived in the village around the turn of the century who often needed a nap in the hot afternoons. When the local people came to see her with their health problems, they usually got the feedback, “Alice a da”, which meant in English, “Alice is asleep” and that eventually was corrupted and became “Adisadel”, this however has been more often disputed.

The other narration which many have touted as the true origin of the name Adisadel says there were some old students of the school who participated in the construction of the school’s buildings above the hill. These boys who would work after classes were referred to Adisifo; and so, the story has it that, people would call out to them saying, “Adisifo, mun fa mu Adere” which in English means “Workers, take up your cutlasses”. This eventually became corrupted and shortened, to become, “Adisadel”.

Adisadel College was the first secondary school in the history of Ghana to have its prefects don special cloaks, red for the head prefects, blue for the other prefects and green for the assistants.

Marriage scandals that have trended in 2021 so far.